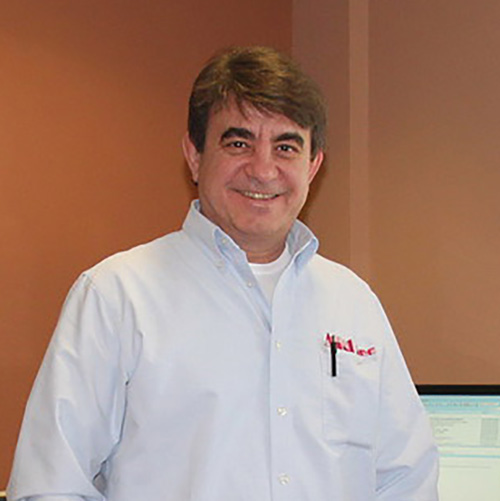 Constantine Grapsas, the CEO and Founder of Automated Industrial Machinery, Inc. (AIM), is an innovator extraordinaire. Creator of the world’s first CNC steel-wire Spiral machine, his wire-bending machine is the fastest in the world – the YouTube video of its performance is legendary with more than 1.6 million views. A masterful entrepreneur with several patents, he has propelled AIM to INC 5000 status for 3 years in a row, as he provides new machine concepts to the wire industry worldwide.

Born in 1965 in Chicago, Illinois, Constantine moved with his parents to Greece in 1969. He attended the 6th Lyceum in Athens and was elected to the student counsel for most of his school years. Amazed with computer programming since he was 11 years old, Constantine’s toys were electronics. He had his first homemade radio station by the time he was 13.

Constantine graduated as an Electrical Engineer from the Technological Institute of Technology in Patras, Greece, and then moved back to Chicago for continuing studies. While working as a busboy in Theodor’s Restaurant on the south side of Chicago, he attended Moraine Valley Community College, then transferred to the Electrical Engineering Department at the University Of Illinois, where he was an Honor Roll student in 1991.

In his first venture into entrepreneurship, he created AcTronics, a company providing computer hardware installation and software services in the Chicagoland area. While attending the Illinois Institute of Technology (IIT), he created the first-of-its-kind CNC steel wire Spiral machine.

Having no credit in the U.S. and with sole support from his father from Greece, Constantine founded AIM in 1992. It began in a rented “garage” in Cicero, Illinois, strategically located next to a tool shop. He began building CNC benders for the steel wire industry. Truly a “sole proprietor,” Constantine was a one-man show, becoming the company’s mechanical designer, electrician, purchaser, assembler, accountant, marketer, salesman, administrator and manager!

His output and creativity have been virtually non-stop. Forever intrigued by the technology, Constantine has pored out new machine design concepts, gaining patents and creating the fastest wire-bending machine in history. To publicize the work of AIM—now headquartered in Addison, Illinois—he has travelled the world, participating in trade shows and other events across North and South America, Europe, Asia, Eurasia, Russia and India.

Today, Constantine Grapsas lives in a Western suburb of Chicago with his wife, son and daughter, busily working on the design of the next industry innovation and implementing the next disruptive technology of the wire industry.