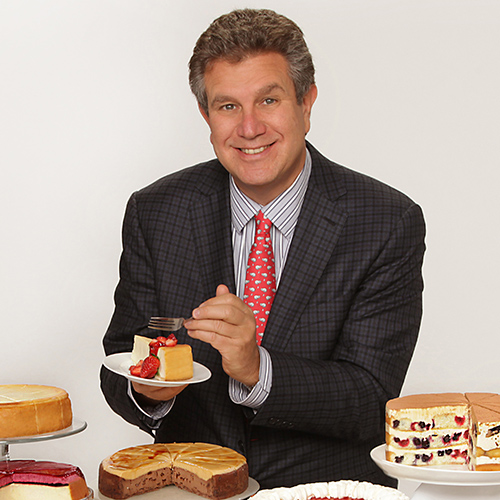 Marc Schulman is the President of The Eli’s Cheesecake Company, one of the country’s largest specialty bakeries.

A graduate of Northwestern Law School, Marc left the practice of law in 1984 to pursue the dream of his father, Eli Schulman; to take the signature dessert from Eli’s the Place for Steak and to build it into a brand that was sold at restaurants and retailers nationally and internationally. Eli’s was named as one of Chicago’s 19 most famous foods by the Chicago Tribune in its 150th Anniversary issue and is known nationally for creating giant Cheesecakes for major events including both of President Clinton and Obama’s Inaugurals, the State of Illinois’ 150th Birthday Cake and the 50th Birthday Cakes for President Obama and Hillary Clinton.

Eli’s now produces over 150,000 servings of Eli’s Cheesecake & Desserts daily at its facility on Chicago’s northwest side. Eli’s customers today include major foodservice chains including Starbucks and Culver’s, United and American Airlines, and retailers including Jewel, Mariano’s and Roundy’s, Costco and Trader Joe’s.

Marc is co-chair of the Business Advisory Council for the Chicago High School for Agricultural Sciences, which is a public high school dedicated to developing the next generation of leaders in food & agriculture, is a Board Member of the Northwestern Memorial Foundation and serves on the Executive Committee of the Chicago Cook County Workforce Board.

All sessions by Marc S. Schulman

A Few Words from Marc Schulman

A FEW WORDS FROM MARC SCHULMAN

A Few Words from Marc Schulman and Richard Paullin